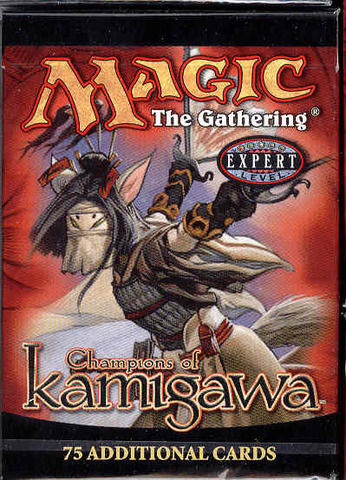 75 Cards per Deck, 12 Decks per Box This box contains twelve 75 card decks with each deck guaranteeing you 3 rares and 1 holofoil. Look for great rares like Cranial Extraction and Kokusho, the Evening Star. Champions of Kamigawa A gang of akki goblins try to flee from an angry ice spirit that appears from out of nowhere. A cloud of bizarre creatures emerge from a samurai's heirloom lanter, attacking him while he sleeps. At the Minamo School, students of wizardry fight nonstop to stem a flow of strange beings that materialize from within the Great Waterfall. The war with the Spirit World has begun. Meet the Champions of Kamigawa! Champions of Kamigawa introduces several new mechanics to Magic as well as the first Legenday Enchantments and more Legends than in any set ever -- including Legends! Bushido -- Creatures that follow the Japanese way of the warrior become bigger when they fight other creatures in combat. Flip Cards -- How does a Legend become a Legend? In these cases, they're regular creatures who can achieve great things in the course of a Magic game, gaining new abilities and even new names and creature types. Soulshift -- The Spirit creatures of Kamigawa can return from the dead when their compatriots die. Splice onto Arcane --This ability of some instants and sorceries allows them to piggyback onto other spells to get their effect without losing the card.
×